A Hub of Support

For Sydney Ziegler, the LGBTQ+ Culture Center is all about connections. A senior and media advertising major, Ziegler has been involved with the LGBTQ+ 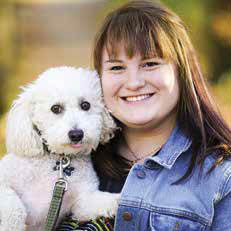 Culture Center since her first days on campus. Now, as she prepares to graduate, Ziegler has had the chance to reflect on the impact of the LGBTQ+ Culture Center during her time as a student at Indiana University.

“Connecting with so many people, whether they’re alumni or new students, has really guided me toward what I want to do afterwards,” Ziegler says.

Ziegler was first introduced to the LGBTQ+ Culture Center during her first semester on campus, when she attended one of the center’s Connections events. A series of gatherings designed to help foster connections between female-identifying and non-binary students on campus, the effort gave Ziegler the opportunity to form lasting friendships that helped her navigate IU. At the same time, events like the center’s Brown Bag Lunch Series broadened her understanding of topics and issues relevant to LGBTQ+ communities. And though Ziegler was able to come out in a supportive family environment in high school, she sees the support that the LGBTQ+ Culture Center offers students who face different circumstances as critical.

It is this community of support, friendship, and curiosity that inspired Ziegler to begin working for the center as an administrative assistant. She strives to provide the same initiatives that initially welcomed her to campus as a freshman, ensuring all students who walk through the center’s doors have the resources to live openly and honestly.

“Just seeing all the freshmen come in, so excited that it’s a resource for them and it’s something that is so accessible, is definitely something that keeps me coming back,” Ziegler says.