Although he had been training for the role for most of his life, Ignoisco Miles still had butterflies in his stomach when it was time for him to lead Camp S.O.U.L. (Students Obtaining Unique musical Levels) last summer.

The weeklong camp, held on the IU Bloomington campus, is open to talented high school vocalists and instrumentalists through IU’s African American Arts Institute (AAAI), an Office of the Vice President for Diversity, Equity, and Multicultural Affairs (OVPDEMA) program and takes place June 11-16. The selected students are introduced to life on a college campus through living in residence halls and meeting various members of the campus community, from current students to staff at the admissions departments and OVPDEMA programs like the Groups Scholars and Hudson & Holland Scholars programs. But foremost on the minds of both Miles and the students at last year’s camp was daily progress toward a culminating performance for the students’ families and the general public on the final day of the camp.

“Every single day, I was nervous,” said Miles, an Indianapolis native who graduated with a bachelor’s degree in theatre from IU Bloomington and is scheduled to complete a master’s degree this summer through IU’s department of African American and African Diaspora Studies (AAADS).

It wasn’t easy to follow in the footsteps of his mentor, Dr. Tyron Cooper, the former director of AAAI’s IU Soul Revue and the camp’s founder. But Miles’ connection to the students eventually led to a successful first-time experience for the fledging actor and vocal coach. 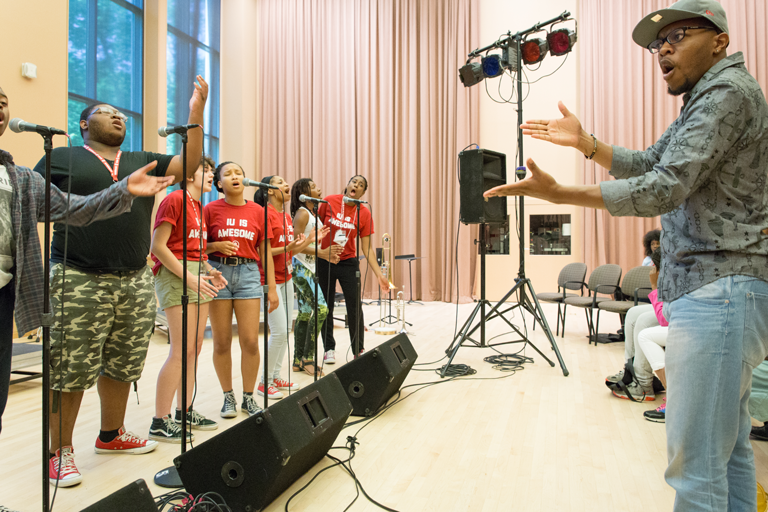 “Since soul music is my favorite genre of music, when I found out the Soul Revue did black popular music, I definitely had to audition. Everybody else had been in the ensemble for multiple years, so putting me in this environment where I was the new guy, it kind of forced me to have to grow up in a sense,” remembered Miles, who also conducted voice lessons for friends and was the director for theater workshops like OVPDEMA’s Groups Theatre program and the Office of First Year Experience’s orientation musical “Welcome to College!” as an undergraduate. “All of this music was being thrown at me and I wondered, ‘How in the world am I going to do this?’ It was a learning experience, and showed me how to be a better teacher and artist.”

“Ignoisco has always displayed tremendous potential, so to watch his development from a talented student into a polished professional has been extremely rewarding. I consider him a model of what the institute aims to accomplish when it comes to seeing students achieve their goals and begin their professional journey,” said Sykes. “His passion for not only his art, but giving back to his alma mater, is very admirable. It’s fantastic that both current and prospective students can be mentored by him, because it wasn’t too long ago when he was in their shoes.”

Miles now resides in Los Angeles, where he’s been getting his acting career off the ground, including playing a lead role in a short film that will be screened at an August film festival, and working as a vocal coach with various artists. But even with his active schedule, the approaching start of Camp S.O.U.L. is constantly on his mind—and not because of the musical aspect of it.

“I think one of the biggest benefits for the students is the environment. A lot of the students come from urban neighborhoods and environments that aren’t necessarily the most encouraging when it comes to higher education, succeeding, and being able to do more than what’s around you,” explained Miles. “Many of us—as counselors, coaches, and even the staff—come from the same environments, so these students get to see professionals and college students that they can see themselves emulating someday and say, ‘They were in my position when they were in high school, and somebody told them that they couldn’t get to college or succeed and they’re doing it, so why can’t I do it?’ One thing that I tell the counselors as the director is, ‘Be as real as you can with the students, because they need to hear those stories.’

“I’ve had students email, call, and text me to ask me questions about applying to college or problems in high school, because they know and trust us. I know counselors who have the same type of relationships with the students. I think it’s really great for the students to have this environment where they can network and be encouraged, because they’re really talented and when they put their mind to it, they can do so much more than what society says they can.”

In his second year as the director, Miles is comfortable enough to put more of his own personality into Camp S.O.U.L. While he didn’t want to divulge too much ahead of the camp’s finale performance (open to the public) on Friday, June 16, it certainly sounds as if the students and audience are in for something special.

“I would say people can expect even more of Ignoisco at this year’s camp. I’m always me, but last year, I was kind of getting my feet wet, because I wanted to make sure I served the camp well,” he explained. “This year, it’s not going to be just a concert feel, but almost a concert-musical-play type of deal, and I think people will really enjoy the theater and musical aspects coming together and meshing. I think it will be a really great show, and I can’t wait to see the students and their excitement to perform, and see them get on that stage and perform.

“That’s what I believe in, making the students shine, because as teachers, even more than leaders, we’re servants and that’s what I want to be to the students, so they understand that anything that they need, I’m here for. I’m here to make sure that they succeed.”