Mya Pomales arrived at Indiana University Bloomington with grand plans. The freshman from Indianapolis has a desire to tour the world and make an impact through study abroad programs.

Pomales and hundreds of other IU students who otherwise might not be able to study and travel abroad now have access to such life-changing experiences thanks to a collaboration between an IU program and a nonprofit organization that supports international study.

The Overseas Studies and Scholarship Program, within the Office of the Vice President for Diversity, Equity, and Multicultural Affairs, partnered for the third and final time with the Council on International Educational Exchange on a Passport Caravan. On February 7, in the Neal-Marshall Black Culture Center Grand Hall, 150 students received their first passport -- for free. And staff from the IU Office of Overseas Study presented the new passport holders with opportunities to study abroad with IU.

CIEE committed to sponsoring 10,000 passports for students nationwide over five years to increase access to study abroad programs so they can gain valuable global and cross-cultural skills.

The latest caravan on the Bloomington campus increased the total number of IU students who have received their first passport through the program to 630. Previously, 280 received passports in 2016 and 200 in 2019. Agents from the IU Passport Acceptance Facility, a division of the Office of International Services, have assisted by processing all the passports.

IU students who received passports were chosen from academic scholarship programs in the Office of the Vice President for Diversity, Equity, and Multicultural Affairs -- Hudson and Holland Scholars, Groups Scholars, and 21st Century Scholars -- with a focus on first-generation college students, minorities and students from low socio-economic backgrounds.

From top: Ochmaa Escue, left, director of the Overseas Studies and Scholarship Program, explains how the Passport Caravan works to IU student Janai Stubblefield; buttons and a flag representing a variety of foreign countries decorate a table; Noah Burke was the 630th student to receive a passport through a Passport Caravan event. Photos by Veronica Mo, Office of the Vice President for Diversity, Equity and Multicultural Affairs

"We know from research that studying abroad can be life-changing," said Eric Mokube, the office's director of financial and budgetary services, who came from Cameroon to the U.S. for graduate studies years ago. "It can serve as a pathway for personal growth and maturity, make networking connections, and open students to cultural learning and professional opportunities."

CIEE is participating in the Generation Study Abroad initiative, which was developed in 2014 by the Institute of International Education. The initiative's goal has been to double the number of U.S. students studying abroad by 2020 by breaking down the main barriers: cost, curriculum, and culture.

"If we take the cost (of a passport) for you, then you are more likely to study abroad," said Seamus Harreys, CIEE's vice president for global enrollment.

This year, the council paid $100 of the $150 cost of each passport, with the Office of the Vice President for Diversity, Equity, and Multicultural Affairs covering the remaining $50.

The Overseas Studies and Scholarship Program learned about the passport initiative at a CIEE conference in 2014 and applied to be a participant. It's one of 118 educational institutions with which CIEE has partnered.

CIEE typically conducts only one Passport Caravan at a university, but it agreed to do a couple more after seeing how well the first one at IU went, said Ochmaa Escue, director of the Overseas Studies and Scholarship Program.

Of the initial 480 IU students to receive passports, 40 percent have studied or traveled abroad through the university, Escue said.

"I think that is a positive result," she said, adding that the percentage is likely to rise because some of the previous recipients still have a year or two before graduation.

IU Bloomington strongly supports the idea of traveling far and wide as a way to learn about the world and oneself, said Yolanda Treviño, assistant vice president for strategy, planning, and assessment in the Office of the Vice President for Diversity, Equity, and Multicultural Affairs.

"Over the last seven years, we have helped more than 800 IUB undergraduate students from first-generation, low-income and underserved backgrounds to fully immerse themselves in a city or country around the world through a study abroad experience," Trevino said. "Each has been given the opportunity to gain new perspectives that may not have been learned solely by textbook, video, or webinar." 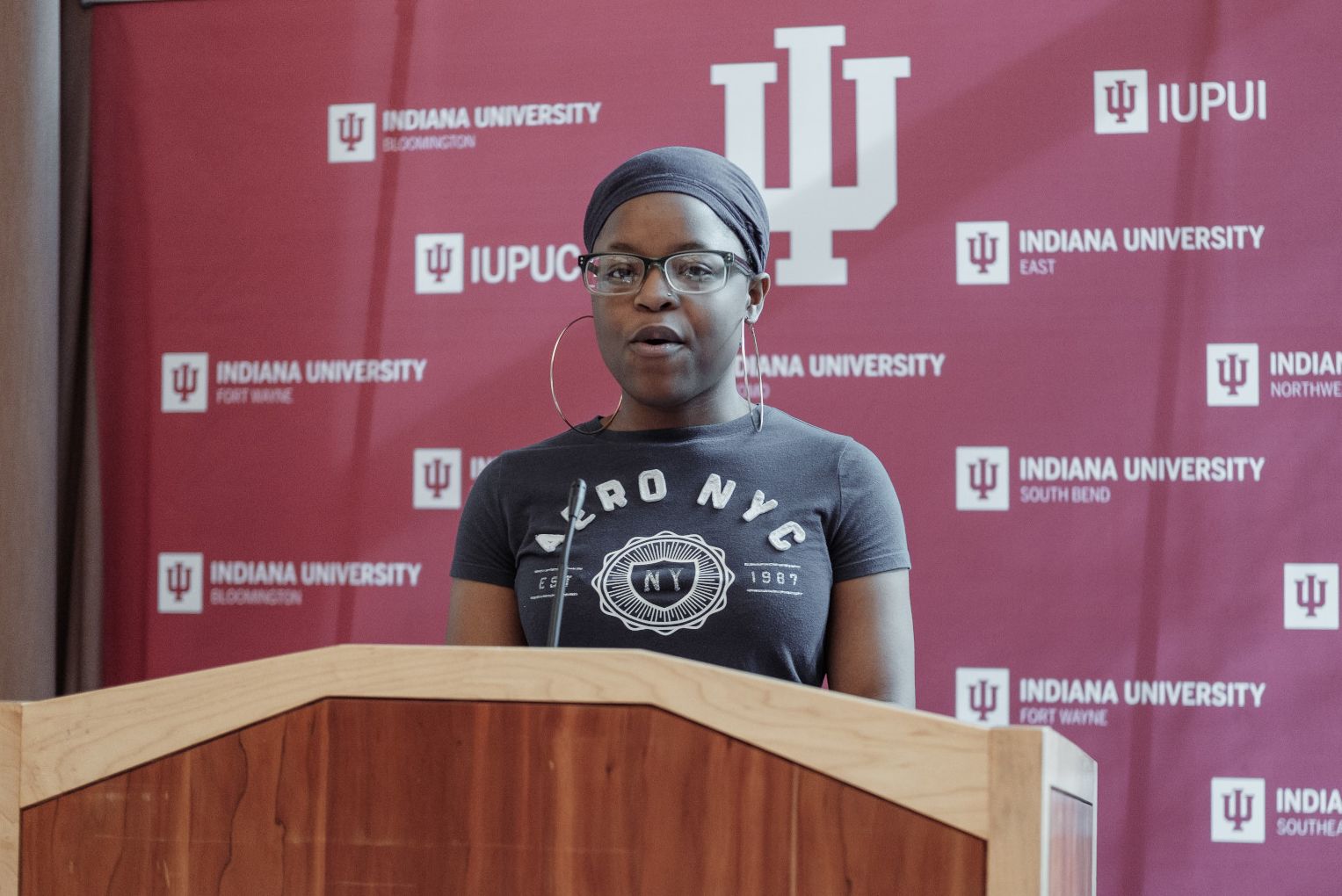 Pomales, who is studying anthropology, said she is hoping to participate in an overseas study program in Lisbon, Portugal, this summer. She said the program is designed to observe and learn the influence of Lisbon, which is one of the oldest cities in the world.

She also wants to travel to Africa, noting that her father is an immigrant from Zimbabwe and that she'd love to see Victoria Falls and elephants.

"I'm anxious, but in a good way. I get to fly now and sooner than expected. I thought it wouldn't be until my junior or senior year," Pomales said. "I can't wait to do a lot of great things with (my passport)."

Ben Okafor, a senior health care management and policy major, said he'd been hoping all year to go on a trip with friends to Cabo San Lucas, Mexico, during spring break, but he didn't think he'd be able to go because he didn't have a passport. After receiving one at the caravan, he said the trip is possible.

So, too, is a trip to Lagos, Nigeria, which is his parents' hometown and where many relatives live.

Okafor said he learned about the Passport Caravan from a friend and jumped at the opportunity.

"I had to take advantage of it," he said.

Olivia Dockter, a 21st Century scholar like Pomales and Okafor, studied psychology at the University of Barcelona in Spain last semester.

The junior, who received her passport in 2016, is the first person in her family to go to college and had traveled to only three or four states outside Indiana before studying abroad.

"It was incredible," she said. "It's hard to put into words. Just so much happened over a semester.

"It takes you a while to wrap your head around it. You meet so many people, and you do incredible things. I feel fortunate how much I've learned and experienced."

She said she's grateful for the Passport Caravan and the efforts of the Overseas Studies and Scholarship Program and CIEE.

"I feel like there are so many generous people trying to help people like me who are first-generation going to college and have never studied abroad," Dockter said. "I have five younger sisters, and I feel like them seeing things people do for other people will help them to look forward and push them in school."