The Neal-Marshall Black Culture Center (NMBCC) will debut a portrait of Caramel Russell, the first director of the NMBCC, virtually on April 17 at 2 p.m. This portrait is part of a larger initiative within the NMBCC to identify and honor Black IU legends.

“During our 50th anniversary in 2019-2020, we did a lot of digging and archival work,” Gloria Howell, director of the NMBCC, said. “And during that time, we uncovered so many Black IU legends who have not gotten the recognition they deserve. We want to say and keep saying their names.”

Known as “Mother Culture,” Russell was the first director of the Neal-Marshall Black Culture Center, although most people outside of the NMBCC don’t know that. “There are no signs of her when you walk in,” Howell said. “There are portraits of other figures, but not of the first director. There are no pictures that speak to her legacy outside our offices, and we want to change that.”

Howell notes they are bridging a gap between the past and present, and while an individual deserves to be honored, it is important to acknowledge what they’ve done for students at IU. 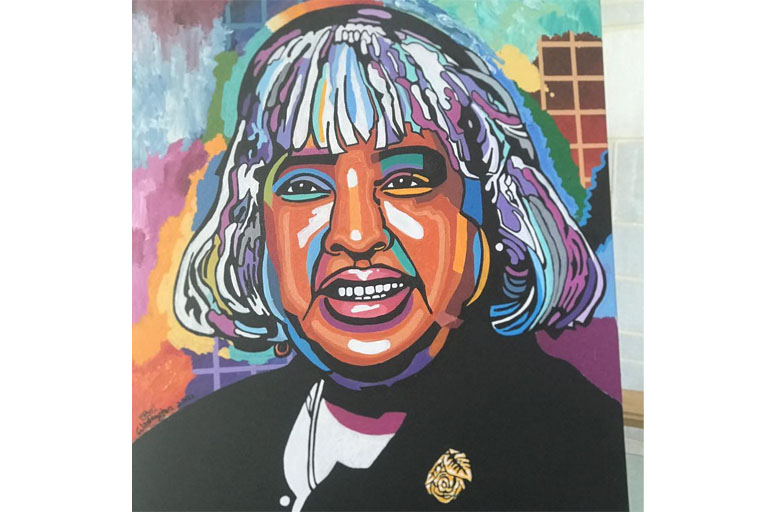 Russell’s nickname, Mother Culture, came from her being unapologetic about Black culture and her willingness to both challenge and support students when necessary. “She cared about every aspect of students’ experiences,” Howell said. “Alums have talked about the fact that she had a nurturing spirit and could chastise and love on you in the same moment. She wanted the students to be holistically, and that’s what I try to embody as center director.”

Joel Washington, a self-taught Indiana-based artist, painted Russell’s portrait. Washington has done previous paintings for the NMBCC, including Carrie Parker Taylor, the first Black woman enrolled in IU, Maya Angelou, and the Obamas. He was the staff’s first choice for the portrait. “He’s someone who’s an amazing artist and so humble about what he does,” Howell said. “When we reached out, he was honored to do a portrait.”

The event features a conversation regarding NMBCC and reflections from Russell’s family members and former NMBCC directors. The NMBCC will also present the inaugural Caramel Russell Spirit of Excellence Award.

Additionally, the Neal-Marshall Leadership Academy 2020-2021 class will be named the Caramel Russell Class in her honor. A year-long leadership development program for first-year, first-semester African American students, this is the fourth year of the academy. This year’s class is the first to be named after a Black IU legend; a tradition Howell hopes to carry on for future classes.