At Saturday’s Potpourri of the Arts concert—the annual show put on by Indiana University’s African American Arts Institute (AAAI), an Office of the Vice President for Diversity, Equity, and Multicultural Affairs (OVPDEMA) program—some special guests were in attendance.

Through a collaboration between AAAI and the Office of Community and Schools Partnerships, another OVPDEMA program, IU President Michael A. McRobbie, First Lady Laurie McRobbie, and a host of students, faculty, staff, members of the community and other attendees were joined by nearly 200 pre-college students from Indianapolis and Gary, Indiana, who were visiting the IU Bloomington campus for the day.

The students and their chaperones left their respective hometowns Saturday morning and after arriving on campus, where they were greeted by Community and Schools Partnerships staff and student ambassadors before embarking on a tour of IU Bloomington. During the day, the group visited OVPDEMA culture centers and met with representatives of the IU Office of Admissions and OVPDEMA academic support programs, such as the Groups Scholars Program and the 21st Century Scholars Program, for presentations about campus life.

After the tour, the students came to the Neal-Marshall Black Culture Center, where they were welcomed by James Wimbush, IU vice president for diversity, equity, and multicultural affairs, and Charles Sykes, AAAI executive director, and had an opportunity to discuss their experience on campus. Finally, they were treated to an experience of a lifetime at Potpourri, featuring AAAI’s three performing ensembles—the African American Choral Ensemble, African American Dance Company, and IU Soul Revue—which are also classes, for credit, within IU Bloomington’s Department of African American and African Diaspora Studies (AAADS). 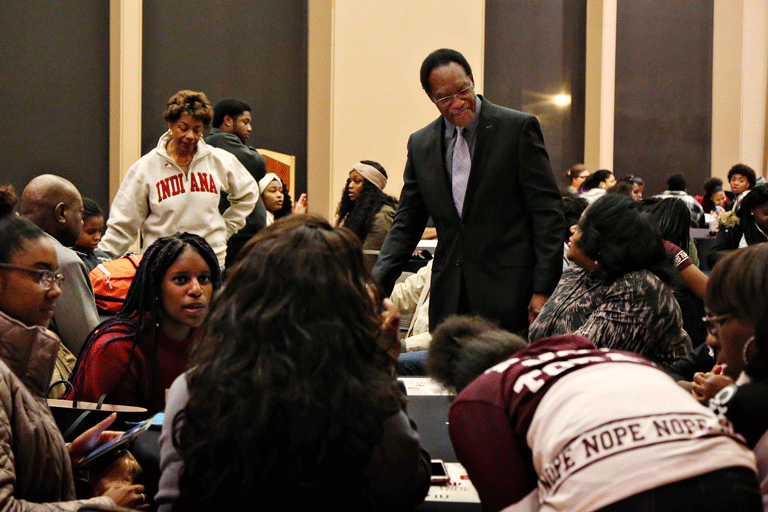 “AAAI has historically been a successful program for helping students, particularly black students, find a community, purpose, and mentorship through graduation. For the past few years, we've been identifying and developing ways to engage in recruitment as well. The Potpourri of the Arts, AAAI's largest production of the year that showcases all three of its performing ensembles, was the perfect opportunity to bring prospective students to campus and expose them to all the possibilities at IU,” said Hannah Crane, AAAI events and communications specialist.

“By teaming up with Community and School Partnerships, and with the generous support of OVPDEMA, we had the facilities to not only bring students to the Potpourri concert, but also give them the complete IU experience—touring campus, meeting IU students and staff, and learning about scholarships and admissions. This partnership of two OVPDEMA programs grew from the collective desire and need to recruit students of color holistically—to provide both the information and tools for coming to college and an inspirational, cultural experience that shows them ‘you have a place at IU,’” added the recent IU Bloomington graduate and former member of the African American Dance Company.

“I've spoken to a number of AAAI students and alumni who have said that attending the Potpourri concert as a middle or high school student was so impactful and inspiring, it was the reason they decided to apply and attend IU. This is our chance to intentionally inspire more and more students, and we are excited to see how this partnership and initiative can evolve to produce more Hoosiers.”

Crane worked with Julia Jennings and Kim Morris-Newsom, director and associate director, respectively, for Community and Schools Partnerships, to set up the visit. While the concert certainly resonated with the students—it happened to be the Potpourri debuts for new directors Stafford Berry of the African American Dance Company and James Strong of the IU Soul Revue—the overall experience was particularly close to the heart for Morris-Newsom.

“We wanted the high school students to be a part of Potpourri, so I contacted people who came to campus visits with Community and Schools Partnerships, people affiliated with IU, and IU alumni, and I told them that we had transportation, food, a great show, and an IU visit with the admissions office and different departments around the community to give them feel for what the campus is all about,” said Morris-Newsom, an IU Northwest graduate who was the first black woman student body president in campus history before going on to teach in the Gary school system. 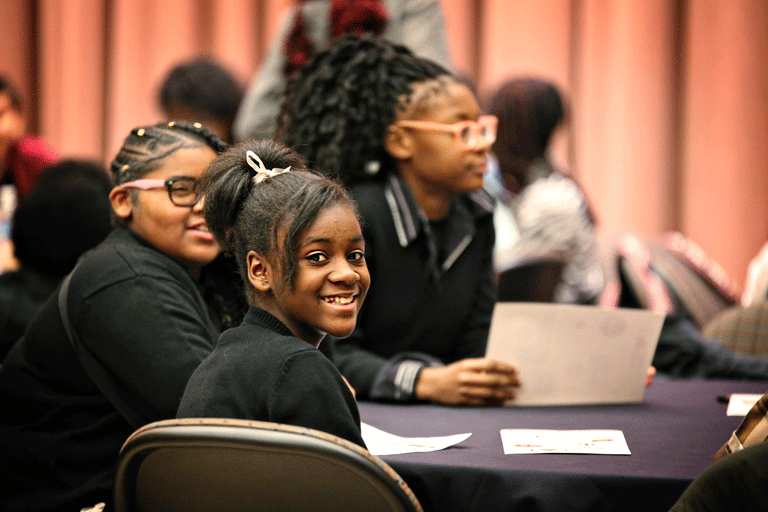 “I reached out to prospective 21st Century Scholars to let them know that this would fulfill one of their requirements for the program. I also reached out to Larry Brewer, an IU alumni who I danced with [in the African American Dance Company] under Professor [Emerita and founding director Iris] Rosa. He’s now the arts coordinator at the Wirt-Emerson Visual and Performing Arts High-Ability Academy in Gary,” continued the Gary native, who has strong community ties throughout Indiana.

“The impact on students is mind-blowing. It’s one thing talking about Potpourri on campus visits, but it’s another thing to live it. Some of the students have never been out of Gary or Indianapolis before. Even high school students in Bloomington don’t always know about Potpourri, so it’s important for us to get into the community and talk about the programs and events that are offered at IU. For students to see this diversity and see another part of African American culture, it gives students the ability to dream.

“Now that they’ve come to campus, we’ll send them information and let them know that they can reach out to us for advice and that we’re here to help. We want to stay connected with them and give them, their parents, and teachers the necessary resources to let them know the process it takes to get to college. Through dance, some of them may be inspired to go to college and even for those who aren’t as talented, we let them know that they can be trained because Potpourri, even though it looks professional, the performers are students, just like them. There’s even former IU students who are now parents, and they bring their kids to events. They feel a kinship with IU now. Just building a connection with them is extremely valuable.”